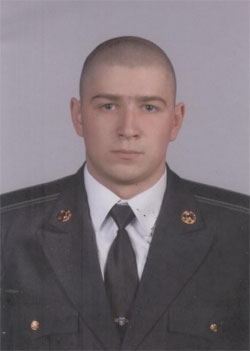 Overchuk Dmytro Ruslanovych was the mechanic-driver of infantry fighting vehicle (BMP) of the 3rd division of the 1st platoon of the 30th individual mechanized brigade of the Land Forces of the Armed Forces of Ukraine, a soldier.

From March 2014, he was on an administrative border with the Russian-occupied Autonomous Republic of Crimea.

On 28 July, 2014, the soldier Overchuk, as part of the brigade unit, carried out a combat task for taking the strategically important height Savur Mohyla (Shakhtarsk district, Donetsk region). A column was hit by the enemy near the village Stepanivka, Shakhtarsk district, Donetsk region. An infantry fighting vehicle (BMP), in which there was a soldier Overchuk, rode headed to the columns, exploded on the mines and burned down. The soldiers sitting on the armor were bursting with explosion. Soldier Overchuk died. Ukrainian troops in the course of the battle were forced to retreat. Since then, the soldier Overchuk was considered to be missing. He was identified due to DNA testing.

On 20 September, 2014, he was buried in the cemetery of the village Shkariv, Goshachy district, Rivne region.

The parents, the brother and the bride are left.

On 17 April, 2015,in the village Gorbakov, a memorial plaque was established on the building of a secondary school (Shklyna Street, 8), where the Hero studied. On 19 January, 2016 according to the decision of the session of village Gorbachivkska in the village Shkvariv the Central Street was called after Dmytro Overchuk Street.