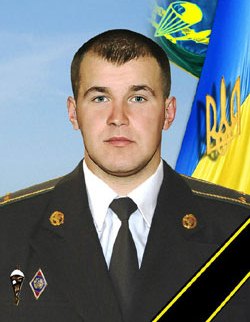 Pasevych Ivan Grigorovich was the deputy of the commander of the 3rd Airborne assault company of airborne assault battalion of the 80th separate airborne brigade of highly mobile airborne troops of the Armed Forces of Ukraine, Lieutenant.

He was born on November 25, 1989 in the village railway Liubeshiv district, Volyn region. He graduated 9 years of secondary school of the village railroad, and Vladimir-Volyn A.Yu.Krymskiy Pedagogical College.

Since 2009, he was in the Armed Forces of Ukraine. In 2013 he graduated from the Airborne Forces Intelligence and Hetman Sahaidachny Army Academy (Lviv) in "Fighting the use and management actions airborne units."

From 2013 he served in the 80th separate airborne brigade of highly mobile airborne troops of the Armed Forces of Ukraine (military unit A0284, the city Lviv).

He participated in the defense of the international airport "Lugansk".

He died August on 16, 2014 protecting two comrades during the attack of terrorists MLRS "Grad" near the village Krasne Krasnodon district, Luhansk region.

He was buried in the cemetery of the village railway Liubeshiv area.

On October 14, 2015 in the village of Railway Square Remembrance and memorial are opened in honor of John Pasevych.

He was awarded the Order of Bogdan Khmelnitsky III degree (14.3.2015, posthumously).