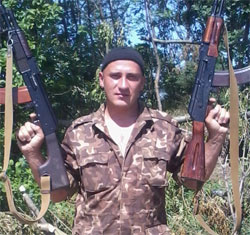 Pidlubnyy Vitaliy Mykolayovych was the senior mechanic - driver of a mechanized platoon of the 9th mechanized company of the 3rd mechanized battalion of the 72nd individual mechanized brigade of the Land Forces of the Armed Forces of Ukraine, a soldier.

He was born on 18 December, 1983 in the village Brane Pole, Boguslav district, Kyiv region. He graduated the secondary school and the Bohuslav higher professional college of the sphere of services in the specialty "Cooker" in 2002.

He was passed the regular military service in the Armed Forces of Ukraine.

On July 9, 2014, about 21.30 soldier Podlubny was seriously injured in an infantry fighting vehicle (BMP-2) as a result of the blasting of an explosive device mounted on the road on the route of the military equipment column, 6 kilometers south of the village of Dmitrivka, Shakhtarsky district, Donetsk region. As a result of the explosion, sergeant Pavel Vysotskiy and junior Sergeant Oleh Mosiychuk were killed.

He had the undergoing treatment in the hospital, but the efforts of doctors proved to be useless. On July 29, 2014, soldier Pidlubnyy died of injuries.

He was buried in the cemetery of the village Brane Pole, Boguslav district, Kyiv region.