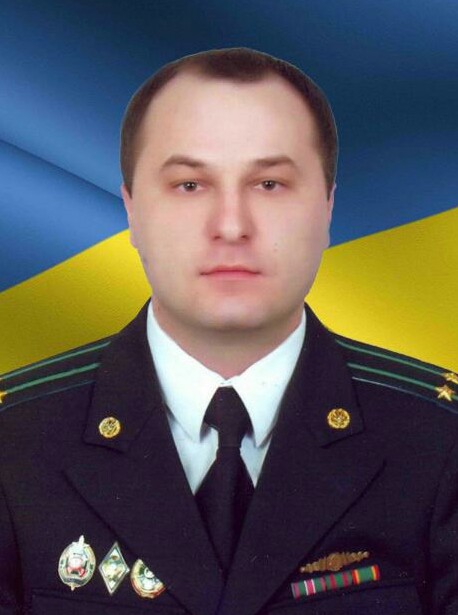 Pikus Yevheniy Mykhaylovych was the senior officer with registration and passport of the department of border control and registration of Staff of the Eastern Regional Directorate of State Border Service of Ukraine, Colonel.

He was born on 14 September, 1979 in the city Vinnytsia. He graduated the secondary school № 30 (now - School-gymnasium № 30 Shevchenko) in Vinnytsia.

On 11 July, 2014 colonel Pikus led the units of the State Border Service of Ukraine near the checkpoint " Krasna Talivka" on the border with Russia, which is located near the village of Krasna Talivka Stanichne Luhansk district , Luhansk region.

On 28 July, 2014 near the village Talove of Stanichne-Luhansk district, Luhansk region , 5 kilometers from the state border, during the search of the official response about the car there was the explosion. Radio-controlled bomb fired. Several soldiers , including the chief of the staff of the regional administration the colonel Viktor Babyuk and the chief of Luhansk border unit the Colonel Serhiy Deyneko got serious injuries. After that the firing mortar immediately began. Lieutenant colonel Pikus Yevheniy, risking his life, drove another car, pulled all wounded people , took the wheel and rushed to the hospital. Despite the mines, which lay almost next to them, and danger of being fired from our checkpoints ( the time to stop and inform about the password wasn`t there), at last he managed to save the lives of his comrades.

On 25 August, 2014 near the village Talove Stanichne-Luhansk district, Luhansk region the departments of the State Border Service of Ukraine entered the fight with the sabotage and scout group, which crossed the State border of Ukraine with Russian Federation in the area of responsibility of the department of border services "Krasna Talivka" Luhansk region. During the battle, which lasted two and a half hours, sabotage and reconnaissance group received fire support in the form of mortars, two armored personnel carriers, two infantry fighting vehicles and two combat helicopters Mi-24 RF Armed Forces,who fired on the positions Ukrainian border with the territory Russian Federation.Despite the numerical superiority of the enemy and fire, border guards managed to stop the sabotage and reconnaissance group, but unfortunately by the great price. During the fight three guards were injured, four ones were killed , one of them was Lieutenant colonel Pikus. The sniper bullet hit him in the head under a helmet and the body armor was struck by two bullets.

On 27 August, 2014 he was buried at the central cemetery Walk of Fame in Vinnytsia.

On 20 March, 2015 in Vinnytsia on the facade of the building of secondary school -high school № 30 named after Taras Shevchenko (Mushketyoriv street, 62), where Pikus Yevheniy studied, the memorial plaque was established. On 25 August , 2015 near the village of Krasna Talivka, Stanichne- Luhansk region on the territory of the Department of Border Service " Krasna Talivka the memorial was opened, which is devoted to the soldiers- border guards , who died on 25 August , 2014 during the battle with Russian sabotage and reconnaissance groups, including the name of Lieutenant colonel Pikus. On 29 April , 2016 during the session of Vinnytsia city council decided to rename Papanin Street to Lieutenant colonel Pikus Yevheniy.

The parents, the elder sister and twin brother are left ( He is also a guard).