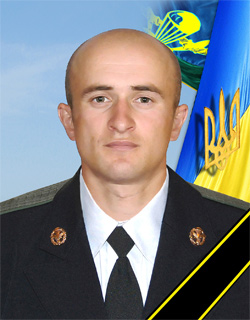 Podfed‘ko Lyubomyr Serhiyovych was the bomber of airborne assault battalion of the 80th separate landing-assault brigade of highly mobile airborne troops of the Armed Forces of Ukraine, soldier.

He was born on 29 July, 1987 in the village Demnya, Mykolayiv district, Lviv region. In 2003 he graduated 9 classes of secondary school of Demnya village, then - a higher vocational school on specialty "Electrician" in Stry, Lviv region.

In 2006-2007 he passed the military service in the Armed Forces of Ukraine.

After his military service he worked as an electrician at a construction site.

On 11 November 2014 he took part in anti-terrorist operation in eastern Ukraine. In December 2014 as a part of the battalion 80th separate airborne brigade he drove to the new terminal of Donetsk airport.

On 1 January 1, 2015 soldier Podfedko was killed during the Russian attack militants in the new terminal of Donetsk airport, where the grenade was torn under his feet .

On 7 January 2015 he was buried in the cemetery of the village Demnya, Mykolayiv district, Lviv region.

On 28 May, 2015 in the village Demnya on the facade of the building of secondary school (School Street, 43), where Podfed‘ko Lyubomyr studied , the memorial plaque was opened.

The parents and three brothers are left.