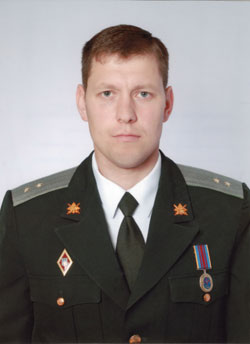 Rachok Mykhaylo Petrovych was the chief sergeant of the company of radiation, chemical and bacteriological defense 95th separate airborne brigade of highly mobile airborne troops of the Armed Forces of Ukraine, Ensign.

For a long time he had the military service under the contract in Zhytomyr Military Institute, November 2013 - in the 95th separate airborne brigade of highly mobile airborne troops of the Armed Forces of Ukraine (military unit A0281 Town Zhytomyr).

On January 26, 2015 Warrant Rachok was killed when an engagement to evacuate wounded soldiers was from the battlefield, when his unit came under the mortar attack near the village Spartak, Yasinovatskiy district, Donetsk region near the International airport "Donetsk".

On 31 January, 2015 he was buried at the monument to fallen fellow-villagers on the fronts of World War II in the village Lozova, Khmilnytskyi area.

On 1 September, 2015 in Khmilnyk in front of the building of secondary school №4 (street on May 1, 39), where Rachok Mykhaylo studied , the memorial plaque was established.On 5 November , 2015 during the 87 th session Khmilnyk City Council decided to rename the city Khmilnyk 3rd lane of Chapaev street to Rachok Mykhaylo.

The parents, the brother, the sister and the wife are left.