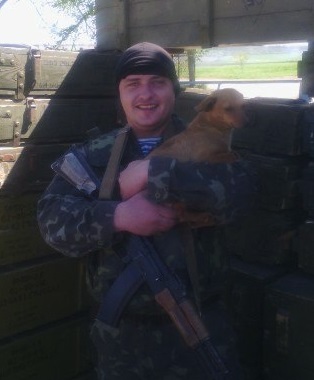 He was born in January 18, 1991 in Kirovograd. Later the family moved to the village Verblyuzhka, Novhorodsk district, and Kirovograd region. In 2006 he graduated 9 classes of secondary school of Verblyuzhka village, in 2008 - secondary school №29 city of Kriviy Rih, Dnepropetrovsk (now - Dnipro) region. From 2009 to 2012 he worked in seasonal jobs, lifeguard sailor on one of the town recreation PJSC "ArcelorMittal Kryvyi Rih". He graduated the National University of Krivoy Rog Krivoy Rog speciality "Metal forming".

In June 14, 2014 around 1:00 am, military transport aircraft IL-76 MD Air Forces of Ukraine, during the approach to the airfield Lugansk city, was hit by terrorists of portable anti-aircraft missile system. The plane had 40 soldiers of the 25 th Dnepropetrovsk separate airborne brigade, including senior soldier Samokhin and 9 crew members. As a result of the disaster, the entire personnel of troops and aircrew were killed.

In July 25, 2014 he was buried in the cemetery of the village Verblyuzhka, Novhorod District.

He was awarded the Order “For courage” of III degree (20.6.2014, posthumously) and honors the city Kriviy Rih “For Service to the City” third degree (posthumously).

The adoptive parents and brother remain.