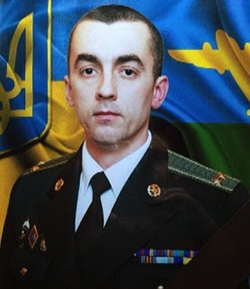 Senyuk Taras Mikhailovich was the commander of the 1st Airborne assault battalion 95th separate airborne brigade of highly mobile airborne troops of the Land Forces of the Armed Forces of Ukraine, Colonel.

He was born on June 22, 1980 in Kolomyja Ivano-Frankivsk region. In 1997 he graduated the secondary school №6 city of Coloma.

In June 3, 2014 during a combat mission to destroy enemy checkpoint near the town of Slavyansk (Donetsk region) Task Force, which he commanded, took the fight. Colonel Senyuk skillfully directed the actions of the personnel, but he was killed by sniper bullets.

On June 7, 2014 he was buried in the central city cemetery Kolomyia Ivano-Frankivsk Oblast ( Dovbysh Str.).

According to the Decree of the President of Ukraine Petro Poroshenko №546 / 2014 of 20 June 2014 for the exceptional courage and heroism in defending the territorial integrity and independence of Ukraine, the Ukrainian nation sacrificial service Colonel Taras Mikhailovich Senyuk was posthumously awarded the title Hero of Ukraine and the order "Golden Star".

In 2014 Taras Mikhailovich Senyuk was awarded the title "Honorary Citizen of Kolomna" (posthumously).

In December 2014 the Day of the Armed Forces of Ukraine Ukrposhta and the Ministry of Defense and the National Guard of Ukraine launched a series of art marked envelopes titled "Glory to the Heroes!". On one of the envelopes Hero of Ukraine, Colonel Taras Senyuk was depicted.

On May 23, 2015 in Slavyansk Donetsk region (in the neighborhood Semenovka) a memorial sign was establishef for fallen soldiers of the National Guard of Ukraine, highly mobile airborne troops and the Security Service of Ukraine on the territory of the Slavic Donetsk region, including the Hero of Ukraine Taras Senyuk .

On May 29, 2015 in Coloma on the facade of the building of secondary school number 6 (Leontovych street, 14), where Hero of Ukraine Taras Senyuk studied, the memorial plague was established.