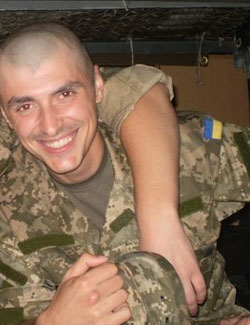 He was born on 13 April, 1985 in the city Vinnytsia. He graduated the secondary school №10 of Vinnytsia.

Since November 2014 he took part in anti-terrorist operation in eastern Ukraine.

On 20 January, 2015 soldier Shevchuk he was gone missing during a battle with the Russian armed groups in the area of the international airport "Donetsk" during the break to evacuate the wounded. In the dense fog and lack of communication, which is "jammed" by Russian armed units, paratroopers in two armored vehicles were caught in the ambush. Originally thought that Leonid Shevchuk was captured, and then he was found missing. In March 2015 his body was identified through DNA examination.

On 3 April, 2015 he was buried in the Alley of Heroes of the central cemetery in the city Vinnytsa.

He was awarded the Order "For courage" III class (23.5.2015, posthumously) and the medal "For Defense of the Donetsk airport" (posthumously).

On 27 May, 2015 in Vinnytsia on the facade of the building of secondary school №10 (Andrew Street, 22), where Leonid Shevchuk studied, the memorial plaque was established.