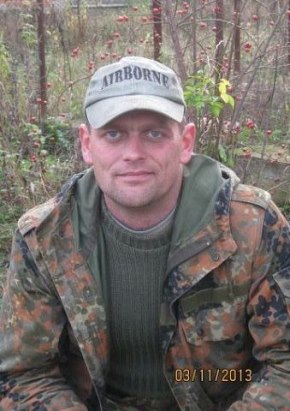 Skulskyy Alexander Oleksiyovych was the deputy of the battalion commander on educational work of the 95th separate airborne brigade of highly mobile airborne troops of the Armed Forces of Ukraine, Colonel (posthumously). .

He was born on November 25, 1974 in Zhytomyr. In 1991 he graduated the Korolenko secondary school number 6 Zhytomyr, and then - Military Institute. .

He served in the 95th separate airborne brigade of highly mobile airborne troops of the Armed Forces of Ukraine (military unit A0281 Town Zhytomyr). .

In the spring of 2014 he took part in the anti-terrorist operation in eastern Ukraine. .

On July 2, 2014 Major Skulskyy died of a heart attack during a combat mission near the international airport "Donetsk"..

On July 6, 2014 he was buried in the military cemetery Smolyanskomu Zhytomyr. .

On November 20, 2015 in Zhitomir, in front of the building of secondary school №6 named after Korolenko (square Korolenko 6), where Alexander Skulskyy studied , the memorial plaque was established. .

The wife and the son remain. .


DEDICATED MONUMENTS:
A plaque on the facade of the building school №6, where Lt. Col. Skulskyy O.O. studied (Zhytomyr)
﻿