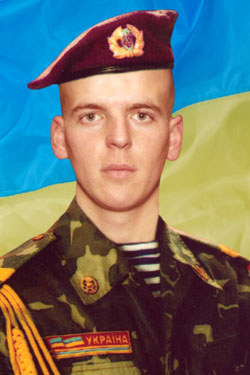 He was born on January 3, 1988 in the village of Stariy Solotvyn, Berdichevsky district, Zhitomir region.

In 2014 he was mobilized into the Armed Forces of Ukraine. His military service was held in the separate 26th artillery brigade of the Land Force of Ukraine (military unit A3091 city Berdichev Zhytomyr region).

On 14 August, 2014 soldier Sokorchuk was killed near the city Amvrosiyevka, Donetsk region during the attacks which took place on the territory of the Russian Federation and the territory controlled by the Russo-terrorist groups. Along with Olexandr Sokorchuk Peter Borysovych Dubyk died.

On 20 August, 2014 he was buried in the cemetery of the village Stariy Solotvyn Berdichev district.

On 24 August, 2015 in Berdichev in territory of the military unit A3091 there was established the outdoor memorial to fallen soldiers of the 26th separate artillery brigade and the 12th separate infantry battalion, including the name of the soldier Olexandr Sokorchuk.

The parents and the brother are left.