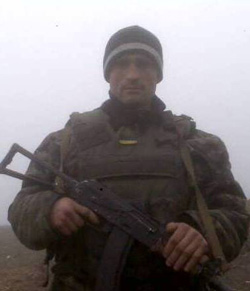 Stolyarov Vasyl‘ Mykolayovych was the senior mechanical engineer of tank of the 72nd Separate Mechanized Brigade of the Land Forces of the Armed Forces of Ukraine, Junior Sergeant.

On 28 January, 2015 he was mobilized into the armed forces of Ukraine. He served as a senior mechanical mechanic of the tank of the 72nd individual mechanized brigade of the Land Forces of the Armed Forces of Ukraine (military unit A2167, the city of Bila Tserkva of the Kyiv region).

On 18 December, 2015 he was buried in the cemetery of the village Voznesenske Voznesensk district, Mykolaiv region.