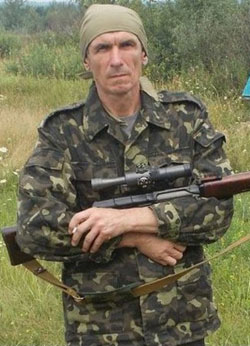 Stratovych Anatoliy Hrymovych was the sniper of the snipers company of the 95th separate airborne brigade of highly mobile airborne troops of the Armed Forces of Ukraine, soldier.

In winter 2013-2014 years he was in Independence Square in Kiev, where he was an active participant in the Revolution of dignity. He took an active part in the activities of the Public Association "Zhytomyr Self-Defense," particularly in the activities of public order and providing volunteer assistance to units of the Armed Forces of Ukraine in the area of anti-terrorist operations.

In August 2014 he was voluntarily applied to the city of Zhytomyr united military commissariat and was sent for the military service mobilization in the 95th separate airborne brigade highly mobile airborne troops of the Armed Forces of Ukraine (military unit A0281 Town Zhytomyr).

Since September 2014 he took part in anti-terrorist operation in eastern Ukraine.

On 26 January, 2015 soldier Stratovych Anatoliy was killed when an engagement to evacuate wounded soldiers was from the battlefield, when his unit came under the mortar attack near the village of Spartak Yasinovatskiy Donetsk region near the International airport "Donetsk".

On 1 February, 2015 he was buried in Smolyanskiy military cemetery in Zhytomyr.

On 17 November, 2015 in Zhytomyr on the facade of Zhytomyr City College (street Mazepa, 18), where Stratovych Anatoliy studied, the memorial plaque was established.

The mother, wife, two children and two grandchildren are left.