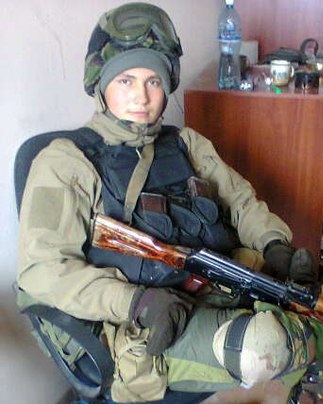 He was born on 16 December, 1995 in Lebedyn, Sumy region. In 2011 he graduated 9th grade of secondary school №9 of Sumy. He studied at Sumy chemical-technological center for vocational education in the profession "Cook-confectioner."

Since the beginning of the revolution of dignity Tabala Serhiy was in Independence Square in Kiev, where he was an active member. On 29 November, 2013 at the Independence Square in Kyiv, Sergey entered the public movement "Right Sector", and later he became a commander of one of the units. In January 2014 he took part in clashes with the "Berkut" on the Grushevskiy street, on 18 February 2014 - in clashes with police in the street Institute, and in the night from 18th to 19th February 2014 his unit defended barricades in the Khreshchatyk street in Kyiv.

In July 2014 Tabala Serhiy went to the training camp of the public movement "Right Sector". Since the summer of 2014 took part in the anti-terrorist operation in eastern Ukraine.

On 28 August , 2014 during the next assault by Russian fighters Ukrainian military positions at the International airport "Donetsk" Tabala Serhiy received shrapnel wounds in the chest and arm. Then the brothers refused to leave military positions, and continued to perform combat missions. But over time, the orders of the commander went for treatment. After treatment, Serhiy returned to the zone of counterterrorist operations, which continued to perform combat missions as a part of his unit in the defense of the International airport "Donetsk".

On 10 November 2014 he was buried in the Alley of honorary citizens of the Central Cemetery of Sumy.

On 17 December, 2014 according to the decision of Sumy city council Tabala Serhiy Oleksandrovych was awarded the title of "Honorary Citizen of Sumy" (posthumously).

He was awarded "National Hero of Ukraine" (01.15.2016, posthumously) and the medal "For the Defense of the Donetsk airport" (posthumously).

On 19 February , 2016 by the Mayor of city Sumy the street of the Paris Commune was renamed after Tabala Serhiy (Syevyera).

According to the decree of the President of Ukraine №516 / 2016 of 21 November 2016 for personal courage, heroic defending human rights and freedoms, dedication Ukrainian people identified during the Revolution of dignity and the protection of sovereignty and territorial integrity of Ukraine Tabala Serhiy Oleksandrovych was awarded the title of Hero of Ukraine , he was also awarded by Order "Golden Star" (posthumously).

The mother and the grandmother are left.