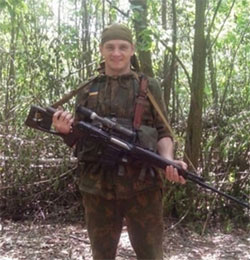 Vasyuk Mykola Oleksandrovych was a sniper of the 1st separate Guards Tank Brigade of the Land Forces of the Armed Forces of Ukraine, a soldier.

From spring-summer 2014, he participated in the anti-terrorist operation in eastern Ukraine.

During June-July 2014, in the 80-th separate airmobile brigade, he participated in the defense of the airport of the city Lugansk. During the battles he got two heavy contusions.

In August 2014 he received a vacation, but due to a sharp deterioration in her health, he was in a military hospital. After passing the course of treatment he returned to the area of anti-terrorist operation. He served in a separate company of snipers near the city Volnovakha, Donetsk region.

During the military service, the disease sharply aggravated. He was tormented by persistent headaches, a very high temperature, which could not be beat down. Vasyuk Mykola was taken to Dnipropetrovsk Military Hospital, then to one of the medical institutions of the city of Kyiv. Doctors found the meningitis and the concussion in the military. After prolonged treatment, on 29 December, 2014, Mykola Vasyuk returned home. On 5 January, 2015, due to a sharp deterioration in his health, he again got to a military hospital. In Mykola Vasyuk there was a high temperature, he began to drown, got mad. On 13 January, he fell into a coma, connected to an artificial respiration device. On the morning of 14 January, 2015, Mykola Vasyuk died.

He was buried in the cemetery of the village Stavyske, Kozeletsky district, Chernihiv region.

The parents, the brothers and the sisters are left.