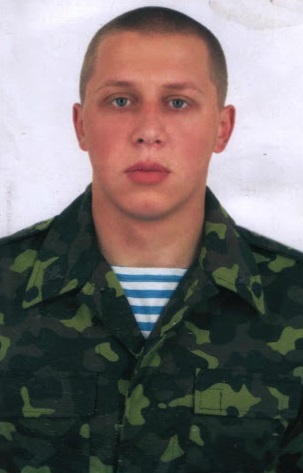 He was born on May 24, 1994 in the village of Novi Stavki, Arbuzynsk district, Mykolayiv region. In 2010 he graduated 9 classes of secondary school, in 2013 - Nicholas professional college.

Since autumn 2013 he had the military service under contract to the 79th separate airborne brigade of highly mobile airborne troops of the Armed Forces of Ukraine (military unit A0224, Mykolaiv city).

On July 11, 2014 near the village Zelenopillya Sverdlovsk district, Luhansk region around 4:30 am n-terrorist groups fired from the MLRS "Grad" to the checkpoint of Ukrainian military shelling, 19 soldiers were killed of Iron 24th separate mechanized brigade and 9 soldiers 79th separate airborne brigade, among them Alexei Volkov was. Only 3 weeks after the attack, Alex body was identified through DNA examination.

On July 31, 2014 he was buried in the cemetery of the village Mykhailivka, Ochakiv district, Mykolayiv region.

On December 3, 2014 in Nikolaev Mykolayiv on the facade of the building professional lyceum (street record, 69), where Alexei Volkov studied, a memorial plaque was established to him.

The parents and the brother remain.