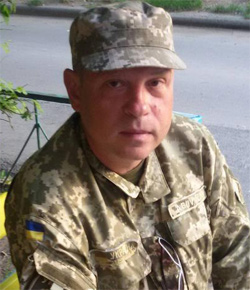 Vovk Volodymyr Mykolayovych was the resident medical officer of the medical company of the 58th individual motorized infantry brigade of the Land Forces of the Armed Forces of Ukraine, the captain of the medical service.

He was born on 21 June, 1972 in the city Ternopil. He graduated the high school in Ternopil and a medical school in the specialty "surgeon".

He worked as a phthysiologist at the Ternopil Regional TB Dispensary.

On 7 February, 2016, the captain of the medical service Vovk died of the cardiac arrest in the urban-type settlement Ocheretin, Yasinuvata district, Donetsk region.

On 11 February 11, 2016, he was buried on the Avenue of Heroes of the Mikulinets Cemetery in the city Ternopil.

On 21 June, 2016, in the city Ternopil, on the building ( Kyivska street, 8), where Volodymyr Vovk lived, the memorial plaque was established.