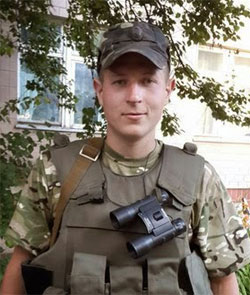 He was born in April 9, 1989 in the village of Semipalatinsk- 4 (now - urban village Chagan Semeyskyi city administration of East Kazakhstan region of Kazakhstan). He lived in the city Nizhyn, Chernihiv region. In 2006 he graduated the secondary school №7 city Nezhin.

In winter 2013-2014 years he was in Independence Square in Kiev, where he was an active participant in the Revolution of dignity. In the brigade of doctors he helped the wounded.

Since the summer of 2014 he took part in anti-terrorist operation in eastern Ukraine. Callsign "Medic".

Since the events in Ilovaysk, Donetsk region, senior soldier Yakovenko on its own initiative interrupted the vacation and went to the area of anti-terrorist operations.

In September 4, 2014 Yakovenko senior soldier was killed during shelling by Russian militias near the town of Debaltsevo, Donetsk region.

In September 6, 2014 he was buried in the Troitske cemetery in Nizhyn.

The wife and son from his first marriage remain.

In the beautiful ancient city in the building of secondary school №7 (Gogol Street, 15), where Denis Yakovenko studied, the memorial plaque was established.


DEDICATED MONUMENTS:
A plaque on the facade of the building school №7, where the older soldier Yakovenko D.O. studied (Nizhyn)
﻿