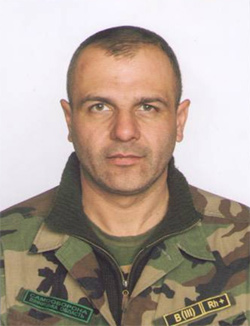 In winter 2013-2014 years he was in Independence Square in Kiev, where he was an active participant in the Revolution of dignity. He was the deputy head in battle of FMG "Self-Defense Maidan".

Since the beginning of hostilities in eastern Ukraine, every week for three months, Olexandr went to the zone of antiterrorist operations as volunteer, who drove the help for soldiers. Then he voluntarily entered the 24th separate assault battalion "Aydar" Army of the Armed Forces of Ukraine (military unit field mail V0624).

On 2 December, 2014 soldier Zaharchuk was killed during the shelling of the Russian-terrorist groups of reactive systems of salvo fire "Grad" position Battalion "Aydar" near the town Shchastya, Lugansk region.

On 2 February 2015 he was buried in the cemetery of the village Pyrogove Vinnytsia district, Vinnytsia region.

On 1 December, 2015 in Vinnytsia on the facade of the building of secondary school №23 (Cosmonauts Prospect, 32), where Olexander Zaharchuk studied, the memorial plaque was established.

The wife, two daughters and granddaughter are left.