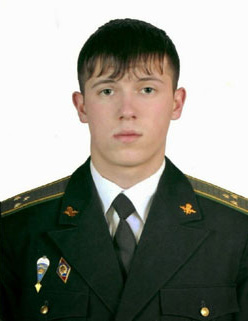 Zelensky Evgeny Oleksandrovich was the commander of a special purpose company Special purpose 8th separate regiment of the Main Intelligence Directorate of the Ministry of Defense of Ukraine, Lieutenant.

He was born on January 28, 1991 in Potsdam (Germany). He studied at the secondary school № 3 of Brovary, Kyiv region. In 2008 he graduated the Ivan Bagryany specialized school number 148, Kyiv.

Since 2008, he was in the Armed Forces of Ukraine. In 2012 he graduated the Airborne Forces Intelligence and Hetman Sahaidachny Army Academy (Lviv), speciality "Management actions military intelligence units and special."

From 2012 he served in the 8th separate regiment of the Main Defense Intelligence of Ukraine (military unit A0553, the city Khmelnitsky).

On June 17, 2014 in Luhansk region Happiness group under the command of Eugene Zelensky was tasked to free from captivity another group. During the accomplishment of the combat mission of a special group got ambushed. During the battle, Lieutenant Zelensky until recently protected their fighters, thus giving them the opportunity to regroup. After that, the group managed to repulse the attack, but the commander was seriously wounded by shots from bazooka and he was hospitalized in the intensive care unit of the Main Military Medical Clinical Centre "Main Military Clinical Hospital" in Kiev.

He was buried in the cemetery Sovskomu (part number 7a) city Kyiv.

According to Ukraine President Decree number 673/2014 of 23 August 2014 for heroism and sacrifice, found in protecting the territorial integrity of the Ukrainian state, military loyalty oath Lieutenant Evgeny Alexandrovich Zelensky was posthumously awarded the title Hero of Ukraine with Order "Golden Star".

In December 2014 the Day of the Armed Forces of Ukraine Ukrposhta and the Ministry of Defense and the National Guard of Ukraine, launched a series of art marked envelopes titled "Glory to the Heroes!” On one of the envelopes depicted Hero of Ukraine, Lieutenant Evgeny Zelensky.

On April 25, 2015 in Kiev on the facade of the building (street Trutenka, 3 g), Evgeny Zelensky where he lived, the memorial plaque was established.

On April 29, 2015 in Kiev on the facade of the building specialized school number 148 Ivan Bagryany (street Builders, 37), where he studied Evgeny Zelensky, the memorial plaque was established.

On December 25, 2015 during the 4th extraordinary session of Brovary City Council decided to rename the street on street Chapaeva Eugene Zelensky.

The parents and two sisters remain.