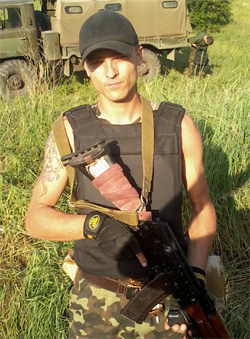 Zhovtyy Dmytro V"yacheslavovych was the scout of 24th separate assault battalion "Aydar" Army of the Armed Forces of Ukraine, soldier.

He was born on 11 September, 1987 in Lviv. He graduated the secondary school in Lviv. He worked at the Lviv State Plant "LORTA."

In the spring of 2014 he voluntarily joined the 24th battalion of territorial defense "Aydar" (September 2014 - 24 separate assault battalion "Aydar" Army of the Armed Forces of Ukraine military unit V0624).

Since June 2014 he participated in the anti-terrorist operation in eastern Ukraine. He had the name "Scorpion".

In June 2014 near the city of Lugansk soldier Zhovtyy closed the fellows from the gap of grenad and he was badly injured. Some time he was treated in the hospital, where he married. Not recovering , he returned to the front.

On 15 November, 2014 soldier Zhovtyy was killed in a traffic accident near the townships Novoaydar Lugansk region.

On 19 November 2014 he was buried in Lychakiv cemetery (right honorable burial №76) in.