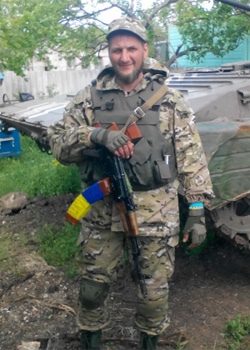 Zinchenko Oleksandr Vasyl‘ovych was a sapper-scout enginner -platoon of the 3rd mechanized battalion of the 72nd individual mechanized brigade of the Land Forces of the Armed Forces of Ukraine, a soldier.

He was born on 18 November, 1977 in the city Fastov, Kyiv region. He was soon left without parents (his father died of the consequences of the Chernobyl disaster at the age of 37). he was brought up by the adoptive mother. he graduated the comprehensive school № 12 of the city Fastov.

In the 1990s he was in regular service in the ranks of the National Guard of Ukraine (Donetsk city).

After the army he worked as a security guard in Kiev.

In 2014, after the annexation by Russia of Crimea and the beginning of an armed aggression on the Donbass, he entered the volunteer battalion. From 2014 he participated in the anti terrorist operation in eastern Ukraine.

Since 2015, he participated again in the anti-terrorist operation in eastern Ukraine. Callsign "Zufar". In May 2015, he received a fractured wounded hand. After treatment he returned to the front again.

On 17 September, 2015, soldier Olexandr Zinchenko died during the demining of a forest belt near the village Starognativka of the Volnovakha district, Donetsk region, as a result of a subversion on the mine.Together with him, Senior Lieutenant Olexandr Vapnyar was killed.

On 20 September, 2015, he was buried on the Alley of Fame of the International Cemetery in the city Fastov, Kyiv region.

The pregnant wife and the daughter from the first marriage are left.

On 16 September, 2016, in the city Fastov, the memorial plaque was established on thebuilding of the educational complex "Preschool educational institution - comprehensive school of I-II degrees №12" (5 Zanchenko Street), where Olexandr Zinchenko studied. According to the decision of Fastov City Council, on 29January, 2016, Kommunarov Street was renamed to the street of Olexandr Zinchenko.