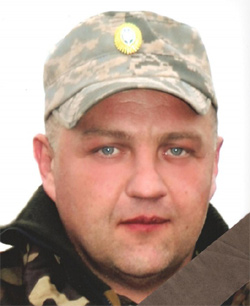 Artemuk Alexander was the commander of 51 th separate Guards Perekopskaya Prague-Kharkiv-Volyn twice the Order of Lenin Order of the Red Banner Order of Suvorov and Kutuzov Mechanized Brigade Army of the Armed Forces of Ukraine, Sergeant.

He was born in September 11, 1977 in Kovel, Volyn region. In 1992 he graduated 9 classes of secondary school №2 city Kovel, then - Vocational school №5 city Kovel. He passed military service in the Armed Forces of Ukraine. After returning from the service some time he worked as a driver, then engaged in private business.

In May 22, 2014 Sergeant Artemuk was killed during an armed attack Russian-terrorist groups on Ukrainian military checkpoint near the station Veliko Anadol nearby village Olhynka, Volnovakha district, Donetsk region.

The wife, two sons and the daughter remain.