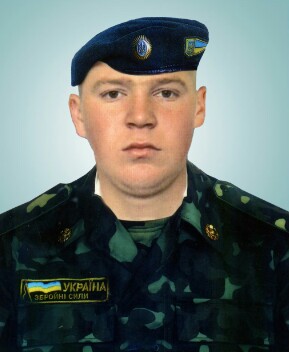 Bida Yevhen Mykolayovych was the bomber of the 3rd mechanized battalion 51 th Guards separate Perekopskaya Prague-Kharkiv-Volyn twice the Order of Lenin Order of the Red Banner Order of Suvorov and Kutuzov Mechanized Brigade Army of the Armed Forces of Ukraine, the senior soldier.

He was born on 11 February, 1992 in the village Kantelyna, Illinetskyi region Vinnytsia region. In 2007 he graduated 9 classes of secondary school of Kantelyna Illinetskyi district, in 2010 - the State institution "Higher professional school №7 of Vinnitsa" and won a profession "Plasterer; tiler; painter".

From 2010 to 2011 he passed the military service in the Armed Forces of Ukraine.

In 2013-2014 he worked in the security service of "Fortress guarantor" of the city of Vinnitsia.

On 22 May, 2014 senior soldier Bida was killed during an armed attack Russo-terrorist groups on Ukrainian military checkpoint near the station Veliko Anadolu nearby Olhynka, Volnovakha district, Donetsk region.

On 27 May, 2014 he was buried in the cemetery of the village Kantelyna, Illinetskyi area.

On the facades of buildings of the village secondary school Kantelyna, Illinetskyi area (opened November 22, 2014, School Street, 1) and the Higher School №7 of Vinnitsa (opened May 20, 2016, street Kiev, 118), where Bida Yevhen studied, the memorial board was established.