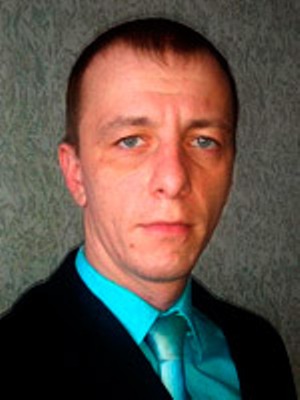 He was born on 30 April, 1986 in Noyshtrelyts, German Democratic Republic (now - the federal state of Mecklenburg-Vorpommern, Germany) in the family of a serviceman. Since 1990, the family lived in Zhitomyr. In 1993-2000 he studied at secondary school №33 of Zhitomyr. Since 2000 - in the town of Berdichev, Zhytomyr region. In 2003 he graduated the secondary college №14 city of Berdichev.

Since 2003, he was in the Armed Forces of Ukraine. In 2007 he graduated the faculty of Odessa airmobile Army Institute (now - Odessa Military Academy). Since 2007, he served in the 80th separate airborne regiment of the Airborne Forces Armed Forces of Ukraine (military unit A0284, Lviv). But after a while he left the military service and was retired.

In the spring of 2014 he participated in the anti-terrorist operation in eastern Ukraine.

On 13 May , 2014 during a combat mission by escorting (accompaniment) calculations 82-millimeter mortars 2B-9, and the food at the checkpoints on the outskirts of the village Oktjabrskoe (2016 - Mayachka) Slovyansk, Donetsk region, about 12.30 hours the column was fired from an ambush. Militants attacked with grenades and were dense with small arms fire. More 30-40 attackers ambushed arrived early and was located along the river in the bushes. The first shots from grenade fell into the second armored engine that caught fire and GAZ-66. Marines took the fight, in a result 6 soldiers were killed and 8 were injured with eight different degrees of severity. As a result of the battle Lt. Dulchyk was killed.

On 17 May, 2014 he was buried in a Smolyansk military cemetery in Zhytomyr.

On 22 August, 2014 in Berdichev in the house (street Nyzhiretska, 38), where Dulchyk Vitaliy lived, the memorial plaque was established.

On 25 June, 2015 during the regular 66th session of Berdichev City Council decided to rename the street and alley of Engels in Berdichev to Vitalit Dul`chyk.

On 13 May, 2017 in Zhitomyr on the facade of the secondary school №33 (United Berdichevskaya Street, 52), where Vitaliy Dul`chyk studied, the memorial plaque was established.

He was awarded the Order of Bogdan Khmelnitsky III class (15.7.2014, posthumously).

The wife is left.