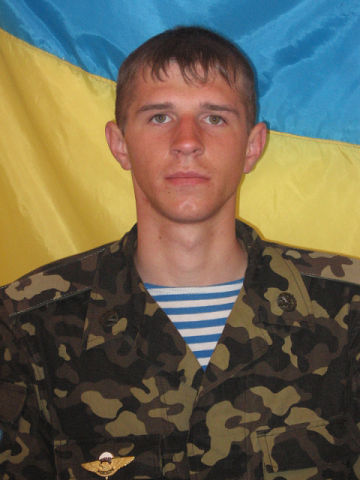 Markowski Vladimir Gennadiyovych was the commander 1st airmobile company of the 13th separate airmobile battalion of the 95th separate airborne brigade of highly mobile airborne troops of the Armed Forces of Ukraine captain.

Since 2005, he was in the Armed Forces of Ukraine. In 2005 he joined the faculty of airmobile Odessa Institute of Land Forces, but later, in connection with the reorganization of the institution, he was transferred to the Order of the Red Star Lviv Army Institute of Hetman Sahaidachny National University "Lviv Polytechnic", who graduated in 2009 with the specialization "Combat application and control of aeromobile subdivisions".

In 2008 he took part in a military parade in honor of the 17th anniversary of independence of Ukraine in Kiev. In 2009 he graduated the Lviv Order of the Red Star Army Institute named after Hetman Sahaidachny National University "Lviv Polytechnic" (now - National Army Academy named after hetman Sahaidachny) specialty "Fighting the use and management actions airborne units."

Since 2009, he served in the 13th Battalion separate air 95th separate airborne brigade of highly mobile airborne troops of the Armed Forces of Ukraine (military unit A1910 Town Zhytomyr).

Since April 2014 he took part in anti-terrorist operation in eastern Ukraine.

On 20 January, 2015 at 07:30 the column of the 1st Airborne company of the 13th separate airmobile battalion of the 95th separate airborne brigade consisting of 6 Spartan armored KrAZ under the control of Captain Markovs‘kyy carried breakthrough to the international airport "Donetsk" to evacuate the defenders of the new terminal. During the breakthrough, an armored car moving in the head of the column broke out. After that, the column of the paratroopers, which was on the runway, was attacked by Russian-terrorist groups, who fired from various types of weapons, including from the tank. During the bombardment, as a result of the explosion, Captain Markovs‘kyy died, covering his subordinates. Along with him, Senior Soldier Atamanchuk was killed.

On January 24, 2015 he was buried in the cemetery of the village Ulashanivka Slavuta district.

On May 8, 2015 in the village Ulashanivka Slavuta district in front of the building of secondary school (School Street, 10), where Vladimir Markov studied , a memorial plaque was established to him.

The parents, the brother and the sister remain.