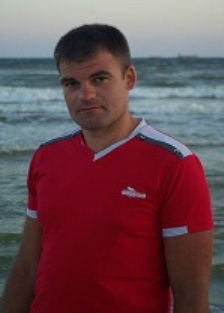 He was born on 11 May, 1980 in the village Rubchenky, Volodarsk district, Kyiv region. He graduated 9 classes of secondary school Rubchenky village in 1998 - Vocational school №27 of the village Volodarka, Kyiv region (now - Volodarsk professional agrarian lyceum) in the specialty "tractor mechanic-driver generalists."

On 20 March, 2014, the Volodarsky District Military Commissariat of Kyiv region he was mobilized into the Armed Forces of Ukraine. He served as the shooter - assistant of the bomber of 9th mechanized company of the 3rd Mechanized Battalion 72 th separate Guards Mechanized Brigade Armed Forces of Ukraine (military unit A2167 (wild-mail V0849), the town Bila Tserkva, Kyiv region).

Since May 2014, he participated in the anti-terrorist operation in eastern Ukraine. He took the service on block posts in Volodarsk, Starobeshevsk, Amvrosivka district districts of Donetsk region. He participated in the accompaniment of military columns, installations "Grad" on the firing positions in the Lugansk region and their cover.

On 9 July, 2014, about 21.30 junior sergeant Mosiychuk killed in Mosiychuk infantry fighting vehicles (BMP-2) by triggering an explosive device installed on the road on the route of the column of military equipment, 6 kilometers south of the village Dmytrivka, Shakhtarsky district, Donetsk region. Sergeant Vysots‘kyy Pavlo was also killed along with him, and soldier Vitaliy Podlubniy died on 29 July from injuries sustained at the hospital.

He was buried in the cemetery of the village Rubchenky, Volodarsk district, Kiev region.