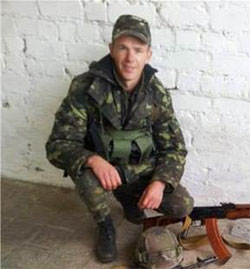 Rymar Igor was the archer of the service staff of the airborne assault battalion of the 80th separate airborne brigade of the highly mobile airborne troops of the Armed Forces of Ukraine, the senior soldier.

He was born in April 16, 1987 in the village Trybukhivtsi, Buchats district, Ternopil region. He grew up without a father; the boy was brought up by mother and grandmother. He graduated the secondary school of Trybukhivtsi village. After his marriage he lived in the village Ripyntsi Buchats district, Ternopil region. He went to work in Europe and Russia.

In November 9, 2014 he took part in anti-terrorist operation in eastern Ukraine. In December 2014 he served in the battalion 80th separate airborne brigade, who came to the new terminal of Donetsk airport.

In January 9, 2015 the senior soldier Rymar during an attack of Russian fighters for a new terminal at Donetsk airport checkpoints "Romeo" due to hitting the shot from an RPG-7 received the serious injuries. From the breaking of the mine his left hand was severed, the jaw and larynx were smashed. The health instructor Zinych held the operation to evacuate the seriously injured senior soldier Rymar. The junior sergeant Zinych stopped the arterial bleeding from the stump of his left hand, torn face and neck wounds, made the tracheal intubation and during 10 hours he supported his livelihoods. As a result, soldier Rymar was successfully evacuated to the hospital in Artemovsk (now - Bakhmut), Donetsk region, and then - Kharkov military hospital. Later on the plane was taken to the National Military Medical Center of the city of Kyiv.

More than two weeks, doctors were fighting for the life of the soldier, he underwent four operations and was in a coma. Unfortunately, their efforts were in vain. In January 27, 2015 Rymar senior soldier died at the National Military Medical Clinical Center (Kyiv).

In January 30, 2015 he was buried in the cemetery of the village Trybukhivtsi, Buchats district, Ternopil region.

The mother and the wife remain.

The collected funds for the treatment of Igor Rymar after funeral his wife transferred to the front (200 thousand) and for the wounded guys in hospitals (over 200 thousand).