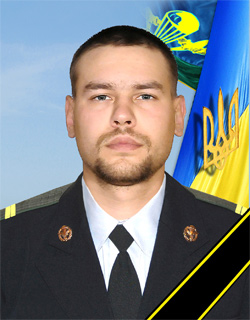 Zinych Igor was the sanitary instructor of the airborne assault battalion of the 80th separate airborne brigade of highly mobile airborne troops Army of the Armed Forces of Ukraine, Junior Sgt.

He was born on September 6, 1989 in the village Rokytne, Rokytne district, Kyiv region . In 2006 he graduated the secondary school №3 of Rokitne, 2009 - Bila Basic Medical College (city Bila Tserkva Kiev region), specialty "Medicine", the qualification of the expert - "assistant". From 2009 he worked in Bila Tserkva city hospital №2.

On November 11, 2014 he took part in anti-terrorist operation in eastern Ukraine. Callsign "Psycho."

On December 17, 2014 Junior Sergeant Zinych as a part of the 3rd Battalion of the 80th separate airborne brigade drove to the new terminal of Donetsk airport. Within 34 days, he saved the lives of wounded comrades, being in danger for their lives under the heavy fire and the constant shelling. He organized the medical item provided psychological assistance to military personnel. Only between 16 and 19 January 2015 Junior Sergeant Zinych could save more than 50 fighters, but only to his credit during his stay in the territory of Donetsk airport more 100 lives were saved. In the field conditions he pursued even the reanimation.

On January 9, 2015 he made an operation himself to evacuate seriously injured people , due to hit the shot of the RPG-7 soldier Igor Rymar with roadblocks "Romeo" who attacked Russian militants. Stopping the soldier`s arterial bleeding from the stump of his left hand, torn face and neck wounds, he made the tracheal intubation and during 10:00 he supported his livelihoods. As a result, soldier Rymar was successfully evacuated to a hospital in the city of Kharkiv.

On January 16, 2015, during a gas attack Russian mercenaries, risking their own lives, Junior Sergeant Zinych evacuated 5 soldiers from stations attacked and gave them the necessary medical assistance.

On January 17, 2015, after the coverage of the fire and the detonation of ammunition of the consolidated unit , before arriving commanders, he was responsible for the command of the defense of the airport, organized bearing the guards, maintenance of the weapons, strengthening the positions, identified the sectors of fire. At the same time provided medical and psychological support to soldiers.

On January 19, 2015 there were particularly fierce fighting on the territory of Donetsk airport. Terminal, where the Ukrainian fighters were, was fired from all sides. After undermining Russian militants the terminal floors, junior sergeant was seriously injured of head by rubble concrete structures, he gave himself the first aid, and, despite the injury and concussion, later he went to help the wounded, whose number has increased significantly. Military paramedic decided to stay until the last wounded soldier was out. The attempts were made to take out the fighters on January 19 and 20, 2015, but the militants did not allow to get the transport.

On January 20, 2015 the militants blew up the second floor of the new terminal of Donetsk airport. Under the rubble Junior Sergeant Zinych was, which broke his spine. Battle brothers pulled the militant medical assistant from the rubble , but soon he died at their hands.

Only on February 16, 2015 the body of the junior sergeant Zinych was taken from Donetsk airport and transferred to relatives for burial.

On February 19, 2015 he was buried in the cemetery of village Rokitne.

According to President of Ukraine Decree №582 / 2015 of 14 October 2015 for the exceptional courage, the heroism and the invincibility of the spirit found in the defense of national sovereignty and territorial integrity of Ukraine, the Ukrainian nation sacrificial service Zinych Junior Sergeant Igor was posthumously awarded the title Hero of Ukraine , Order of "Golden Star".

On March 25, 2015 in the village of Rokytne on the facade of the building Central Hospital (street Vokzalnaya, 86), where the hero worked ,the memorial plaque was established. On May 22, 2015 in the village of Rokytne in front of the building of secondary school №3 (Lenin Street, 13), where Igor Zinych studied , a memorial plaque was established.

On June 18, 2015 in Bila Tserkva on the building Bilotserkivskyi medical college (Skvyrske Highway 240), where the hero studied , the memorial plaque was established. In the area of anti-terrorist operation ambulance was named after him .On February 18, 2016 in the village Sovetskaya street of village Rokitne renamed to the street Igor Zinych.