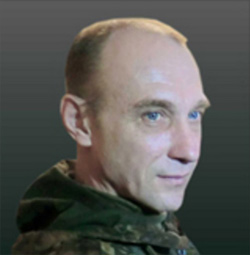 He was born on 29 September, 1967 in the city of Vinnytsia. In 1984 he graduated the high school №33 in Vinnytsia, then - average vocational school №19 of Vinnitsa. After graduation he worked as a fitter-welder at Vinnytsia bakery radio equipment "Mayak".

From 1985 to 1987 he was in the regular military service in the ranks of the Armed Forces of the USSR.

Since 2000 he has worked abroad for a long time.

In the autumn of 2014, he participated in an anti-terrorist operation in eastern Ukraine.

Participant in defense of the city of Debaltsevo, Donetsk region.

On 4 August, 2015 soldier Trofymchuk died as a result of injuries in the mortar attack on the Russian-terrorist groups observation post Ukrainian military in heaps mine "Yujna" near the village Leninske, Dzerzhinsky City Council, Donetsk region (2016 - urban village South Torez ).

On 6 August, 2015 he was buried on the Alley of Glory of the Central Cemetery of Vinnytsia.

On 6 May, 2016 in Vinnytsia on the facade of the building of secondary school №33 (Porika Basil Street, 20), where Trofymchuk Valeriy studied, the memorial plaque was established.

The wife and the daughter are left, as well as the son from the first marriage is.